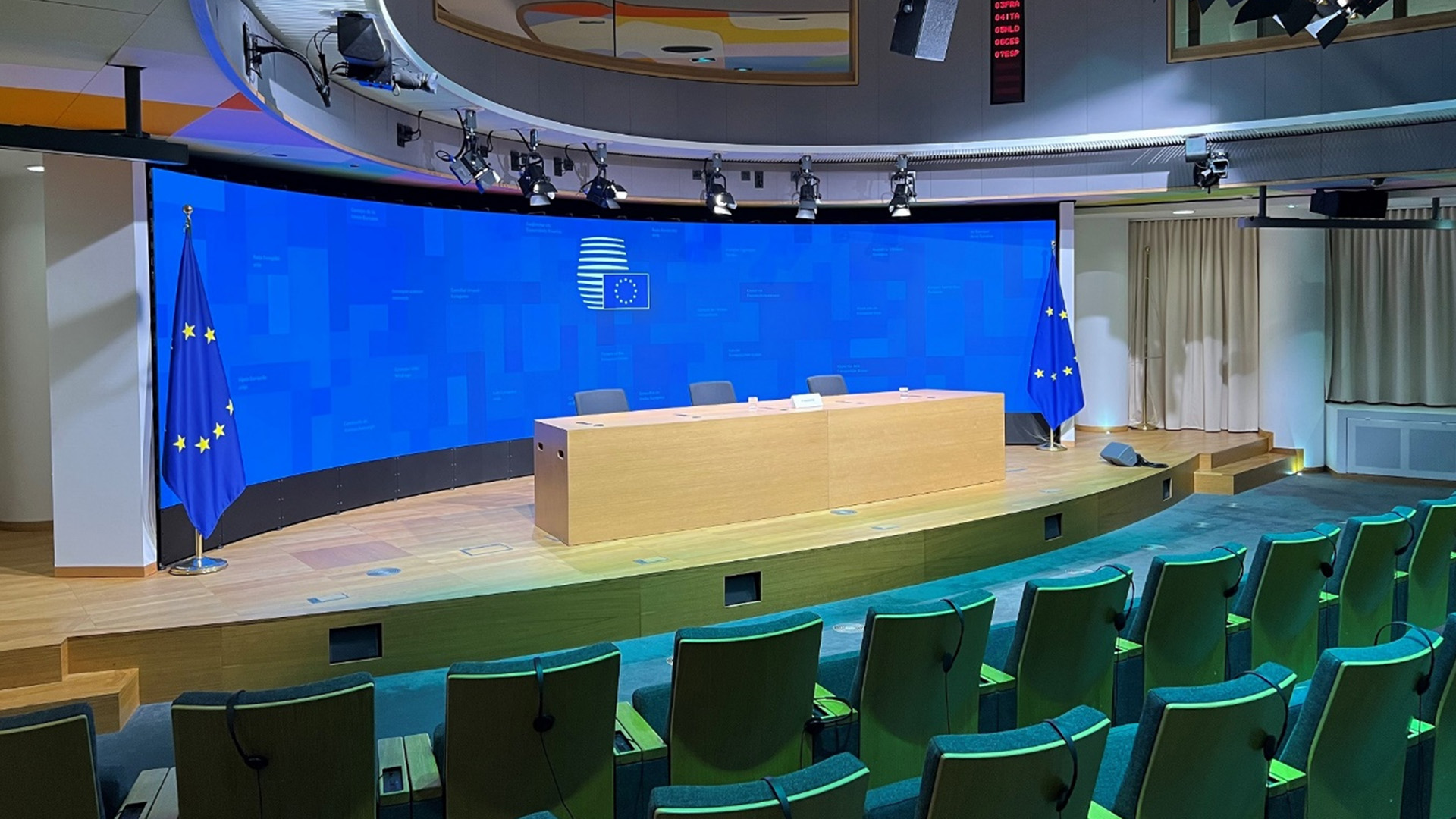 Video control for Council of the EU press facility

tvONE CORIOmaster2 and Hippotizer solutions have been installed at the Council of the European Union and European Council headquarters in Brussels, to drive several LED and LCD walls used as graphical backdrop during high-level international events. Housed in two buildings, the Council of the European Union is where ministers from each EU member state meet to discuss, amend and adopt EU directives, and coordinate policies. The European Council, housed in the same buildings, is responsible for the political direction and priorities of the European Union.
The institutions already use two tvONE CORIOmaster2 video wall processors at their facilities in both the Justus Lipsius Building and the Europa Building in central Brussels. In the Europa Building, a CORIOmaster2 manages the visuals on a Barco LED wall in the VIP entrance - where Heads of State and ministers enter the building - and a Leyard LED wall in the pressroom of that building. In the Justus Lipsius Building a second CORIOmaster2 processes the graphical background of the TV studio, comprising three Planar LCD videowalls and one large 4K Konvision LCD display, as well as a brand new Leyard LED wall in the main pressroom.

The video wall in the Europa Building pressroom

The video wall in the Europa Building pressroom is a Leyard LED wall, made up of 96 Leyard AT 1.5 pixel pitch LED panels, enveloping the speakers in a curved, horseshoe formation. This pressroom is mainly used by the President of the European Council, Mr. Charles Michel, following his meetings with world leaders.
The CORIOmaster2 used in that building, as well as the Leyard wall, were supplied to the Council of the EU by Athens-based AudioVisual and Broadcast Systems Provider and Integrator Telmaco S.A to the AV technical team at the Brussels facility.
The new video wall in the Justus Lipsius Building is a flat LED wall made up of 100 Leyard AT 1.5 pixel pitch panels which was provided and installed, as well as the CORIOmaster 2 driving it, by the Brussels-based Broadcast Systems Provider and Integrator VP Media Solutions.

The in-house team at the Council of the European Union and the European Council say that they value the versatility of the CORIOmaster2, noting that it is modular, so that they can customize it with numerous different input and output cards. They also highlight that the powerful technology under the hood of the unit can control three different canvases or graphical spaces with ease, and that the handling of presets means easy creation and recall and that set up was simple to achieve.
The CORIOmaster2 handles various media for the press room LED wall, ranging from still PNGs to SDI feeds, moving clips, and NDI streams.
The Council of the European Union and the European Council also have three Hippotizer Media Servers installed, with one Karst+ in each of the two press rooms and one Boreal+ in the TV studio. The Karst+ units are mostly used to display background still or moving pictures which have the same definition as the LED walls, but the team also uses them to display layouts using several layers and effects.

The Boreal+ is used to control the video set of the TV studio, which they say works very efficiently, using the layers and effects features of Hippotizer to achieve the desired visual looks and the hardware to display NDI sources such as cameras or remote participants.

tvONE is a world class developer and manufacturer of video conversion and AV signal distribution technology, with offices in the US, and R&D and manufacturing facilities in the UK. tvONE provides a complete line-up of products and services for the professional AV, broadcast video, and digital signage markets. tvONE now encompasses three superior brands under one umbrella, tvONE, Magenta Research and Green Hippo.
Source: Council of the EU press facility installs tvONE and Hippotizer visuals solution

AV solutions are tested in our own AV test-lab

Our Audio/Video team is focuses on the professional audio/video and command and control (KVM) market. Through years of experience in the professional AV and KVM world, Intronics thinks in solutions, not in products. We know the market, give independent advice, deliver different AV solutions. These solutions are tested in our own fully equipped AV test lab.

The AV Lab is used for pre- and after-sales support such as:

Our AV professionals are ready to help

We are in direct contact with our manufacturers. Let us know if you need additional information or help while choosing a suitable solution.